A while back, when walking up Tottenham Court Road on my way for burritos at Benito's Hat, I happened to notice a new shop across the road – the name Belgique and the colours of the Belgian flag outside instantly drew my attention, hoping some miracle had occurred and the unlikely scenario of a Belgian deli had opened up in the middle of London.
Skipping across the road, I wasn't disappointed – in fact it was better than that; this place was full of delights, and at totally reasonable prices too! Immediately I scanned the beer fridges for some old and revered favourites – trappiste beers Rochefort and Westmalle, beers from Achouffe, Ecaussines, Maredsous, Feullien. But there were also some unusual and newer bottles from Belgoo, Viven and others. An enticing selection, but even better was the price – Orval at £2.45 anyone?
Venturing further into the shop, the chilled counter made my eyes widen with the selection of Belgian cheeses on offer – hard to find sometimes even in Brussels. Lots of brewery cheeses such as Chimay, plus ones I hadn't seen before – I didn't know Achouffe made a cheese – 'Patachouffe' – so of course that needed to be sampled. And having been sampled, had to be purchased! There's a great range of charcuterie too: saucisson, pates, Ardennes ham – again a great selection, all reasonably priced.
If amazingly tasty meat and cheese isn't your thing, they had many other little delights – from mini patisserie and Speculoos-flecked chocolate bars, to jenevers and Belgian whisky.
It turns out from talking to the friendly and enthusiastic server that this is the mid-London outpost of a small chain of East of London shop-cafes, from Ware near Hertford down to Wanstead, with TCR being the only purely shop premises.
I can't believe more people don't know about this place yet – it's not far from Euston, so a great stop-off point for making up a train picnic with cheese, meats, and good-quality chocolate for afters. And I think the selection of beers at reasonable prices would please avid beer drinkers too.
My recommendations if you're stuck for choice would be: 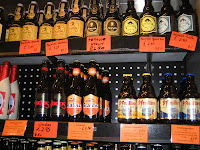 Ecaussines Hercule Stout – a hefty beer that can sometimes be hard to find – for a very reasonable £2.50, you'd be hard pushed to find it cheaper in Belgium.
La Chouffe – a flavoursome blonde, now in 330ml bottles
Boon Framboise or Kriek – good examples of fruit beers, not too sweet
And good old Rochefort 10 – IMHO the epitome of a great Belgian beer
Posted by tania_nexust at 12:04