Ever since I drew up my Resolutions at the start of the year, I'd been looking for an excuse to revisit Manchester, to explore it's plethora of great bars, and find some beer I'm excited about drinking in a pub I really want to drink in, which isn't a combination I get often in Birmingham (yet; that may change when a couple of in-the-pipeline craft beer bars open in future months). So when I found there was a band I wanted to see playing the Manchester Academy, it seemed like the perfect reason for a visit, even more so when the venue is just round the corner from a great beer bar like The Font.

The Font is a busy student-oriented bar with wall décor by David Bailey (no, not that David Bailey) with a simply outstanding bottle range, constantly updated with new releases both from across the water and from the best of the English beer scene, like Red Willow, Hardknott, Quantum, Buxton, Marble, Magic Rock, Thornbridge and others, many of which are local breweries. There are also great brews from Belgium, Holland (De Molen), Germany, and the major league of the US craft scene are all there – Stone, Victory, Sierra Nevada, Brooklyn, Goose Island, Rogue, Great Divide, Flying Dog, Left Hand, Maui, Anchor, Anderson Valley, The Bruery, and Coronado. 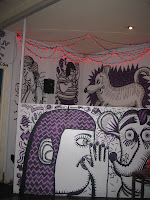 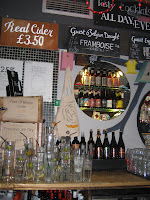 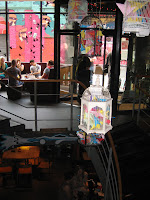 Price-wise, there are some big hitters – Bruery bottles are £18, the Dogfish Head & Sierra Nevada collab is £20, and the Thornbridge and Odell Pond Hopper comes in at £18. But many of the smaller US 330ml bottles are very reasonably priced at under £5, and even better, a very generous 25% discount is applied on take-outs, making this a good stop for a train beer on the way to Piccadilly.

Today's visit started with a Hawkshead USPA, one of the beers from this brewery I've been wanting to try for a while, and this had great crisp and fresh flavours, leaving your mouth dry and ready for another sip, while being just the right side of bitterness. On cask, I also tried the Black Jack first Deal, a maltier bitter, and on keg the Magic Rock High Wire, while my drinking partner settled with immense satisfaction on an Odell IPA, one of the best 'standard' US IPAs (in our tastebuds' opinion anyway) and always pleasure in a glass.

We knew we had to get a hotel beer in for after the gig in case The Font was too rammed to be served later, and it was very hard to choose from such a huge list, but eventually we decided on the Anderson Valley Hop Ottin', though I was also tempted by the De Molen as the Americaans @ £4.70, the Jaar & Dag @ £5.50, and £4.20 for the Op & Top, they were all looking pretty tastily-priced when you apply that 25% discount. 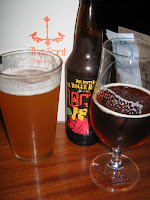 Next I tried the Rogue Dry Hopped St Rogue Red Ale in 335ml bottle as I was in the mood for something red & hoppy. This instantly smelled like a quintessential US craft beer, with sweet malts and big hop oil aromas, reminding me of drinking in New York bars. The pronounced bready grain flavour from the rye is there from the first sip, and I love that – it's good to properly taste the rye and feel the 'chewiness' after. Sometimes rye beers I've had are too bitter and unbalanced, as if the rye can't meld successfully with the hop elements, but this one was lovely and definitely different to non-rye IPAs.

After some food and a quick trip to drop off bags and beer at the hotel, we headed out again, popping into the Salisbury by Oxford Road station, to see what was on – the cask offering was mostly from major brewers – Ansells, Wychwood, Caledonian – but with seasonal beers from these adding some interest. But despite the alt-friendly music policy, we decided to move on to the Thirsty Scholar. This had Copper Dragon, Thwaites & Ilkley's Mary Jane. I tried a half of this as recent samplings of it when it's appeared in bars around Brum have failed to live up to the first two times I had it and it showed an instant “wow” factor in both aroma & flavour – but unfortunately it was a bit lacklustre here also. So, it was back to The Font for more Odell hop goodness before onwards to the gig.

Across the road from the Academy we spotted KRO Bar which looked interesting, and as the main band hadn't come on yet, we went in to check it out. Had some decent draught Paulaner Hefe Weisse and Maisels Dunkel Weisse, and noticed their menu is of Danish & German pub food – frikadeller, fish platters, schnitzel, moules and pork loin, with mains around £7-8 – worth remembering for tea sometime if I'm back up this way.

The gig finished promptly at 11pm, so it was back to The Font for the third time this evening, this time to check out the Brooklyn EIPA in cans. This didn't have as much hop bite as I know it can have, so it left me a little bit hop-hungry and wishing they still had the excellent Odell Myrcenary in stock. Never mind, I soon sorted it out with a Red Willow Ageless Double IPA, which I initially had to drink through a straw due to the enormous head, but it eventually settled down.

The bar is a bit manic with student life at 12am, so you need to know exactly what you want, what your second choice would be, and be firm in queueing to be served. We wanted a last Odell IPA of the night, but by this stage we had exhausted their supply! So we settled on a Coronado Mermaids Red IPA, Cascade-hopped and sticky-sweet, as a fine nightcap and end to an evening of successful imbibing.