One meal that I constantly get cravings for is ramen – the “big noodle soup bowl” that has it's roots in China, but the Japanese have now made their own. There's even a ramen museum in Yokohama, which I was due to visit on my trip to Japan last year, but due to the Tōhoku earthquake & tsunami affecting travel insurance (although we would have been quite willing to go and support the area), we weren't able to visit the Kantō area – though there's plenty of good, cheap ramen to be found everywhere in the country of course. Each region of Japan has it's own variation on the dish, and everyone will have their own personal tastes – so I'd say what is 'right' or 'the best' ramen is entirely a matter of personal opinion. Once I get a craving for it though, I just have to have some – but that can be difficult in England.


My two top ramen experiences are imprinted on my tastebud memory - firstly in a small ramen-ya along the side of Namba station in Osaka – we were guided there on our first day in Japan by a chum who had been before, and soon I was being served up ramen heaven – a miso-based broth with chilli oil and chunks of pork, what I'd been dreaming about since the idea of a trip to Japan was first mentioned – and I often have wistful thoughts about this little café. The second is ramen made for me by @dave_car, which always seems to be both flavoursome and healthy – this time a dashi and shoyu-based stock with a kick of birdseye chilli; silky noodles (not the pre-fried kind); lots of vegetables in the mix (baby pak choi, carrots, spinach, peas and shiitake); and slices of belly pork, wafer thin so that they cook in an instant once added to the broth. But a return visit to Osaka or having someone prepare ramen in my home aren't always available to me, so sometimes there's a need to find out-and-about options for when cravings must be met. 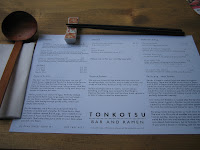 When I heard that a new ramen joint called Tonkotsu had opened up in Soho, with a very short menu just focussing on 3 ramen dishes and side orders of gyoza (little dumplings that are often served in ramen-ya in Japan as they are another Chinese import), I knew I had to make it my mission to go there. The opportunity arose in July, and I took another Japanophile with me so we could try a couple of dishes.


Their speciality is the eponymous Tonkotsu – a rich stock made by simmering pork bones in a shio (salt) base for 18 hours - you can see the large stock pots bubbling away in the open kitchen just inside the window - with pork slices, menma (bamboo) and seasoned egg on top. The noodles were light and the broth translucent and unctuous. We also tried the Tokyo Spicy – with shredded spicy pork on egg-based noodles, and various other toppings. The pork was tasty and it was overall very satisfying, but I was expecting a good deal more spice and had to ladle in some chilli condiment to get the kick I was looking for. The gyoza were really light and springy – steamed, and then slightly fried on one side, with a tasty pork and prawn filling – very good. There's also a vegetarian ramen option with shiitake for that umami-base, and a few other gyoza varieties, but we needed a pork hit so didn't get to try these. 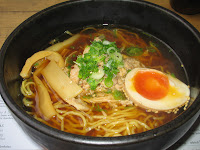 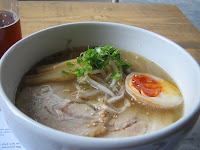 Tokyo Spicy on the left, Tonkotsu on the right

Another big draw of Tonkotsu is that has included some craft beers on it's list – from two of London's most respected microbreweries – Kernel and Beavertown. There are a couple of different beers available from each and they are reasonably priced, for London and these particular breweries, at £4. There's also a couple of Brewdog (including Tokyo*, 18%!) and some standard Japanese lagers; a couple of different grades of sake; shochu and Japanese whisky.  It was so welcome to be able to have a decent beer with lunch, sitting at pavement tables watching Soho life go by.


Closer to home, a new noodle cafe has opened up in Birmingham's Chinatown area – MinMin. I had heard they were good, and went to investigate. This is a really charming place – bright white tiles and green décor, making a bit of a cheerful change from other places in the area. They have an extensive menu of noodle-y options but I was here for ramen, and ordered the yakibuta – cooked pork – which came with a decent selection of toppings - cured egg, thick, crunchy bamboo shoots, seaweed, beansprouts adding texture, and nori. It also had sweetcorn, which is a feature of Sapporo-style ramen; I was dubious about this addition at first, but have come to quite like it. My dining companion had the chilli squid with rice, and we were given complimentary soya desserts – one with mango sauce, and one with ginger syrup, which were unusual but a palate-freshening end to the meal.

The ramen broth at Minmin was lovely – on the right side of salty, and although they have chilli oil available, I had brought my own Nanami Togarashi – a Japanese chilli pepper mix - to add the spice level I like. I have been back a few times since to Minmin to try their char siu ramen as well – and they really don't stint on the generous amount of meat included. The cheung fun are also lovely – steamed rice rolls with a savoury filling of minced meat and mushroom, a delicate tangy dipping sauce and seasoned salad – though they are slippery buggers to eat. My tip would be to ask for wooden takeaway chopsticks instead of the plastic ones they'll give you by default – as they're much better for getting a grip on slippy noodles and delicately picking up strands of sea vegetables from the soup.


It's cute to note that all the ramen bowls have the hiragana for “oishii” - Japanese for delicious – on the side, and while I was last visiting, they were sticking up some Chinese characters on the window. I recognised the first of these as it also appears in Japanese script as “dai” - meaning large, or also “great” - I asked the waitress what the symbols meant and she said “big bowl noodle” - but if following the Japanese meaning, I'd happily recommend it to people as ”great” bowl noodle to be found inside!

Special mention must also go to the staff of Minmin – as well as the co-owner, Denice Phan, who comes out of the industrious kitchen to chat to customers, I've also been served by three different girls, and they are all extremely friendly and make you feel at home. Minmin is gaining in popularity as it offers something a bit different to what we already have in Birmingham, in a cool, modern environment, and at reasonable prices (ramen is around £6.80) – and from the few I've tasted, the dishes so far have been great, so I think most people will be hooked after one visit. I'm certainly getting an attack of ramen-want just thinking about it!

So these two English ramen experiences have been very positive – I think Minmin's yakibuta may just top Tonkotsu for my personal tastes, but on the other hand, Tonkotsu offers craft beer, meaning I'm more likely to linger there and snack on gyoza. But it's great to see a couple of decent ramen ventures now taking their place in London and particularly Birmingham; I'm sure eventually I'll try out all the other exciting and good value dishes that Minmin has to offer, but it will take a while (and a good few more visits) to wean me off my ramen cravings first.