Just as there are a growing band of Birmingham folks who are exploring craft beer, supporting our forward-looking off licences, keeping an eye on what real ales and bottled beers are available in city haunts, and hopefully witnessing the rise of the 'Craft Beer Quarter', there are other areas where the city's drinkers have seen progress in recent years – in a bloom of innovative cocktail bars, a gin parlour opening, and new ventures such as independent wine retailer and tasting room Loki Wine.

A whisky scene has also been developing in Birmingham over the past 12 months, almost single-handedly crafted by The Whisky Miss, Amy Seton, who decided at the end of 2011 that there weren't really any whisky-based events happening in the city at which to go and learn, so she set about starting up her own. This luckily coincided with a branch of The Whisky Shop opening in Great Western Arcade, and other interested individuals coming out to play.


To celebrate the first birthday of these events in December 2012, Amy had pushed the boat out by organising Birmingham's first ever whisky festival – bringing a one day celebration of the worldwide craft of whisky making to those keen to learn more. I arrived at the venue, the Old Joint Stock pub, to find a room already full of whisky explorers and exhibitors from various distilleries and merchants. There was just time to have an initial sample of Old Pulteney 12 with it's sea air aroma and a quick chat to the lasses who had come down from the distillery in the far north of Scotland, before heading to the parlour downstairs for a cheese and whisky masterclass, being led by Craig Mills from The Whisky Shop and David Capeling from Capeling and Co. cheesemongers. 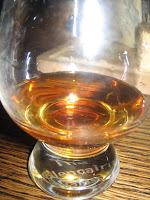 It was exciting to be in a room full of people in Birmingham who were just as interested in food and drink exploring as I am, and there was a range of expertise from relative beginners like myself, to those who had many years of whisky learning behind them. Our samples were poured into Glencairn glasses which I'd first come across at a tasting in Herriot-Watt university, while David explained that there are no ground rules when it comes to matching whisky and cheese, leaving it an open field for exciting experimentation.


David had selected five fine cheeses for us to try, and Craig had then matched these with whiskies that complemented or contrasted:

This was a triple-cream, silky smooth, mild and light cheese, paired with the fruit driven, fresh and low acidity Benriach – the cheese brought out the sweetness at the end of the whisky, which in turn highlighted the savoury aspect of the cheese.

This sweet and nutty non-typical cheddar was matched with rich flavours in the whisky – praline-like with a sweet and spicy finish.

Craig explained that this was a 'terroir' matching, in that the cows that provide the milk for this cheese, are fed the 'draff' – the spent mash from the Tobermory distillery. This was a strong, sharp, briney cheddar with a farmhousey aroma, and the whisky used peated water with a spicy mouth-tingling quality that becomes sweeter as it's consumed with the cheese.

A single pot still whisky from the makers of Jameson, fairly pale in colour with light honey notes. The cheese was strong, sticky and pungent, with lots of yeasty, Marmite umami-ness, with a bitter note in the rind, in contrast to the easygoing nature of the whisky.

This was my favourite pairing of the day; a modern spongy-textured Scottish blue cheese with a salt tang pepping up it's creaminess. The Glenmorangie, finished in Bourbon barrels, brought an aged smoothness with hints of coconut and warmth, almost like a spiced rum at times; this held up well to the piquancy of the cheese. 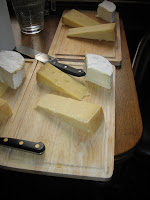 The food matching was an excellent idea, and guidance from the experts helped us to examine what notes were being brought out from both sides and learn about what we were capable of picking out flavour-wise. My only gripe was that a few slices of baguette or plain bread would have helped with the cheese eating, and some paper plates and a knife each would have lessened the messiness a bit, but I certainly couldn't fault the selections made and the helpful dissection of flavours.


Then it was back to the main room to wander around chatting to whisky sellers and producers while sampling from the 50 different whiskies available to try. As I was with a few friends, we were happy to share our samples to make sure we tried as large a range as possible, as the selection on offer was pretty comprehensive – and with eager guidance from those manning the stalls, you could be sure to find several that suited your personal preferences. 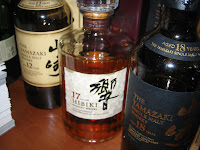 Some highlights for me were:
Yamazaki 18 – a rich colour picked up from the Bourbon casks; sweet and fruitcakey.
Hibiki 17 – like an Olorosso sherry, and very moreish!
Dalmore Tay Dram – from a program whereby Dalmore contribute money back to restock Scottish rivers. This had great crème brulee and coffee flavours, and rich, sticky fruit. 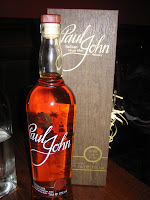 Paul John Cask 161 – an entirely Indian-made product; the producers are experimenting with how the climate and conditions in India accelerate the wood ageing process, although about 10% is lost to the Angel's Share. This is gaining plaudits in the whisky world and has lots of tempered heat.
Scapa 16 – has a soft elegance, with lemon, honey and apricot giving a very modern lightness.
Aberlour A'Bunadh – this was at the other end of the spectrum, extremely rich and warming like nestling by a fireside.
Kilchoman – from an Islay distillery only opened in 2005; this had a lot going on aroma-wise for such a young whisky.

Everyone was invited to take part in a competition to collect whisky facts as we sampled, and at the end the winners were drawn - some entrants were lucky enough to end up with bottles of interesting whiskies to take home, and there were consolation prizes of distillery tours as well. In addition, there was a good offer to take advantage of - The Whisky Shop provided discounts for most of the whiskies exhibited, either to purchase on the day, or to order for later collection from the shop nearby.


The event was a great chance for some exploring of the many different aspects of uisce beatha and to chat to like-minded individuals, and encouraging that it represented a first for this type of gathering in Birmingham. Even better, then, that Amy has organised a larger scale festival, “Whisky Birmingham”, to take place on Saturday 2nd March 2013. This promises to be a fantastic event with a return of Capeling and Co's cheese matching, and catering from Soul Food Project – more info and tickets can be found at http://www.whiskybirmingham.co.uk/ and I'd certainly urge both whisky beginners and experienced palates alike to check it out!