So a couple of weekends back I travelled over to to Leicester to help out on the Cider Bar at their annual CAMRA festival, check out the ciders and beer, eat some curry, and enjoy serving lots of thirsty customers.

Leicester CAMRA branch has been fortunate to have some very active Cider and Perry campaigners who are passionate about the product and have worked hard to bring a great selection to the festival - in the several years that I've been attending, first as a festival-goer and now as a bar volunteer, it has gone from strength to strength, and currently under the stewardship of Susan, with "enthusiastic" tasting assistant Paul, it's in very good hands indeed.

The selection this year was broad as usual, but most noticeably to me was an increased number of 'local' cider and perry varieties - that is, made within the East Midlands. So the scope of styles on offer ranged from the those using traditional cider and perry fruit varieties, to those using some cookers and eaters in the mix, and from bone-dry to quite sweet, with other variations thrown in such as spirit-cask finishing and single varietals (made with one variety of cider apple or perry pear displaying particular characteristics - like grape varieties in wines).

The shift behind the bar on Friday evening was steadily bustling as usually it's the busiest session for the festival overall, but it wasn't so manic that we couldn't keep a sure flow of cider into the glasses - though busy enough that I think I only managed a couple of halves myself during the hours I was there!  We also worked on Saturday during the day - this is more of a slow-but-steady serving pace, which is absolutely great as you have the time to devote some proper service to each new face - asking them what kind of thing they're after - very dry, slightly sweet, pear, apple, something different? - then though a few carefully-chosen samples, you can help them define it a bit further. Is that Gwatkins farmhouse perry a little too sweet for what you're after? Then try this Ross-on-Wye perry - it's drier-finishing and a little more rounded. Tried the Tricky dry cider from Somerset and found it a bit challenging? Maybe the Janet's Jungle Juice or the Gwynt-y-Ddraig Black Dragon will be the easy-drinking appleyness you're looking for. It was great this year to have just enough time with each person to take them through a few samplings and have them work out for themselves whether it was dry or sweet, West Country or otherwise, cider or perry that floated their boat. Of course, you do get plenty of customers already well versed in their cider and perry tastes, who know they want a dry scrumpy or a Welsh perry, or who head straight for the Olivers first (that would generally be me, I think Tom Oliver makes some of the best cider and perry in England and will take every opportunity to re-qualify my viewpoint with a few samples myself!).

Among the particularly satsifying experiences this year was trying the first perry from Nottingham-based producer Torkard - this was medium-dry, fruity, and really very moreish. So much so that I was almost reluctant to be recommending it to customers, as it would deplete my own chances of having another half. Also pleasing was having an American visitor come to the bar and after some gentle questioning it transpired they'd never had perry before - several tasters were administered to help them work out firstly if they liked it, and secondly what kind of thing they liked - they declared the Rockingham Forest Perry to be wonderful, and they were an instant perry convert!

Saturday also yielded the fastest-selling barrel of cider I've ever seen - the Ben Crossman's Premium Farmhouse Rum-Cask Finish was put on around 3pm as a 'reserve', when stocks of some other ciders (particularly slighter sweeter ones) were beginning to run dry - and it lasted less than 3 hours before it too was gone - it was a great example of a spirit-cask finished cider, with a dry note to start but a sweeter finish, with the rum adding complexity but without overpowering on the nose or flavour. It seemed to be an instant hit, with many customers coming back to ask for more after their initial half or third-pint. I noted the pace of sale and quickly secured a two-pint takeout so we had something to enjoy at home the next day.

I did make a brief soujourn into the beer spectrum while having a break from working to enjoy some of the curry that's staple fare at this festival - and despite there being plenty of choice on the beer front, I kept being drawn back to the Brodies Red RyePA - I'd been tipped off by @AlcofrolicChap from his visit a few days previously that this may be a good one to check out, and sure enough, when I was handed my first half of it, the juicy fruit and grapefruit aromas bursting out of the glass made me laugh out loud and do a little "yay hops!" dance in front of the bemused bar staff - couldn't help it though, the aroma was pure delight - and when having breaks from the cider & perry, I nipped over for some more of this tasty ale. I just wish we saw more of Brodies in the Midlands, they're definitely hop-tastic. 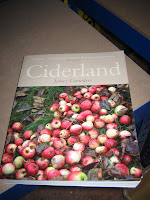 I really love working on beer festival bars and particularly the Cider Bar - it's a great opportunity to spend the day talking to people about something I love and share some enthusiasm, but it's also extremely rewarding to take someone though a tasting process and have them end up saying "yep, that's the one - pour me a half, please!". Roll on Leicester next year, and well done to the team there that put on such a brilliant festival - thanks in particular to our unflappable Cider Bar commander-in-chief, Susan!
Posted by tania_nexust at 11:01