For many things in life, if someone were to ask "what's your favourite?", I'd find it impossible to answer. It's all about context and mood - I could give you a favourite for "right now" but couldn't commit to an all-time top of the list. In music, my tastes are wide-ranging and pretty eclectic, and expanding all the time - what's on the stereo right now depends what musical mood I'm in, or what mood I want to get to. When it comes to beer, I used to have a favourite (Orkney Dark Island) when I was in the very early days of discovering ale, having been a predominantly real cider drinker who didn't know what a hop was. But now, having travelled the length and breadth of the beer spectrum, and watching it change and mutate all the time, I could tell you what beer or flavours in a beer would suit me right now, but picking a single favoured beer out of the multitude of amazing brews out there would be out of the question. Food-wise, it's kinda the same.

But, if someone were to ask me what meal I couldn't do without the prospect of eating ever again, it would have to be Irish Broth. Since moving to England, I've come to appreciate it even more - because back home, you can find it pretty much on every street corner - it feels like every pub, café, restaurant or hotel will have it on the lunchtime menu, always tasty and sustaining. I've adjusted a bit to it not being so available now, but it's usually the first thing I'll eat when I get off the plane back home.

It's also a staple of home kitchens, and every little Spar shop carries a pre-packaged 'soup veg mix' - so I guess gallons of the stuff is made and yummed up across the country in homes every day. Again, that's something I've had to get used to not being able to find - the veg that is chopped and packaged usually contains a fair whack of celery leaf, used here as a large part of the flavouring component - but it seems impossible to find in any soup-making quantity in English markets or shops, I guess maybe because people here don't know what to do with it. It's reduced me to furtively messing with the packaged celery in supermarkets, tearing off any leafy bits from the other bunches and stuffing them inside the bunch I'm going to buy, just so I have enough to add to my soup. This doesn't feel like stealing from other celery-shoppers, 'cause I reckon it's only going to be chopped off and discarded anyway, so at least I am putting it to good use.

You can make Irish broth with any leftover stock you happen to have - best examples from family experience are a roast chicken carcass (as you end up with lots of little shreds of chicken meat in your stock) or what's left over when you've boiled up a big ham. But currently I tend to use a good-quality chicken stock cube for convenience (though for my last batch I was lucky enough to have some homemade chicken stock donated to me by my friend Emma).

The recipe I follow was provided by another chum who grew up with broth's tasty delights, and is rather inexacting, but once you've had broth a few times, you kind of know how to guide it towards your own preferred consistency and greenery anyway. As well as 'soup veg mix', there is another component called 'soup mix' of dried barley, lentils and split peas, which again you can buy ready-mixed in packets back home, but you may have to buy all three then mix them up yourself here to get the right kind of thing. Or just use the barley if that's easier.

Note - you'd need to start the prep the evening before for pulse soaking, or in the morning, then make the soup in the evening after work. 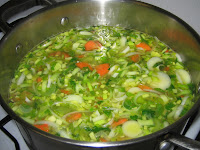 So, to make:
1. Put your stock and soup mix into a large pot, bring to the boil. Simmer for 30 mins, skim off any scum.
2. Add your soup veg, cook 20-30 minutes on a simmer.
3. Add your shredded meat and cook a bit.
4. Ladle into bowls, add plenty of fresh ground black pepper before slurping up. 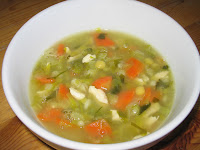 It's really good with a few slices of buttered wheaten bread and will most often be served that way in cafés, but also makes a more substantial evening meal if you pop a couple of leftover boiled potatoes into it like my granny used to do. I can never get enough of it once I've made it, and it's a struggle to retain some for freezing or for lunch the next day; there always seems like there'd be room for one more bowlful!

If anyone does come across somewhere with proper Irish broth on their menu outside its homeland, please do let me know so I can check it out - until then, I think I'm bound to scouring the greenery aisles of supermarkets, sneakily gathering in the celery leaf crop!
Posted by tania_nexust at 19:28

Email ThisBlogThis!Share to TwitterShare to FacebookShare to Pinterest
Labels: soup