While at a Gin Tasting event a while back, run by  @YetAnotherGin, I bumped into Neil and Chris, who then helped spur me on to start some homebrewing. We had met up a few times since, with other interested parties, to discuss our homebrew adventures (mostly so I could pick their brains!) and on one occasion the idea came about of picking a 'topic', each brewing something along those lines, then meeting up to drink and check out each others' beers along the common theme.

When we picked a style, it was still winter - so we opted for a stout or dark beer - but in the end when trying to fit this in around everyone's schedules and remembering to get the brewing done, it was 5th May before we could get our acts together and meet. Present were myself, Neil, Chris, Sam, Emma, and Matt. Sadly our fellow homebrew club members Dave and Andrew couldn't make it, so hopefully we'll have another go when they can attend too.

So we had all brought some bottles of something roughly equating to a stout, and then we all tried to impress each other with the outcomes of our homebrewing efforts. The prize? An evening of consuming lovely beers with good company - so a win all round! 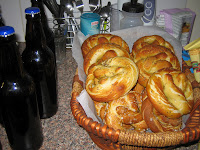 Chris had also hand-made some amazing pretzels (so good I had to smuggle some home for the next day), and Neil had procured several varieties of cheese, so we had some excellent scran to keep us from absorbing too much alcohol while getting the hard work of sampling underway.

In an effort to provide some objective feedback rather than just a 'that's nice!'  for each beer, I took some tasting notes as we went along:

Sam - Spiced Porter
Brewed with nutmeg, spices, and Tia Maria. Using Muntons London Docklands Porter kit, modified with 3 star anise and 1 cinnamon stick added at the start of fermentation.Before bottling, half a pint of Tia Maria was added along with sugar measured out for secondary fermentation. Sam expected this had turned out around 4.5%. Flavour wise - it had great hints of spice that weren't overpowering but were definitely present, and the Tia Maria coffee liqueur added a lot of depth and structure, with the sugars giving a lot of effervesence. It was certainly moreish but a rich and warming drink - you'd want to come home to this one on a chilly winter night.

Tania & David - Coffee Stout
Using a Coopers Premium Irish Stout 4.5% brewkit, this was modified in the fermenting vessel with a litre of fresh brewed Italian rich roast filter coffee. This was only our third brew and we really wanted that rich coffee flavour to come out strongly, but in a balanced way. We had consumed the main batch from a pressure barrel at home, but we'd also made our first attempt at bottling, specifically for this 'dark beer challenge'. Sadly Dave wasn't here to taste the results, but I was pleased to report back that the bottled version still retained those strong flavour notes, with a good bitterness from the coffee and the bottle having a bit more body than the original draught. It wasn't perfect, but it was drinkable enough, and I was just relieved it had some flavour and no-one poured theirs away (at least, while I was looking ;-)

Matt - Scammonden Dark
A 2-tin kit from Brupak that produces a 4.5% beer, with dry hopping sack included. Fruity on the nose but this had a really dry, roasty finish - a good contrast for the earlier sweeter porter of Sam's. A good dark brown colour with light carbonation and a creamy brown head. Third beer in, and so far all were ones I'd have been happy to have been served in a pub.

Neil - Oatmeal Stout
Using a Coopers Stout kit, so the same as I had used for the coffee stout, but this time Neil had added a bag of oats in the FV. This had a really smooth mouthfeel but with a bit of liveliness. Interesting to see how some small modifications can make the same kit quite different, and it would definitely encourage me to try using oats next time I make up the kit. 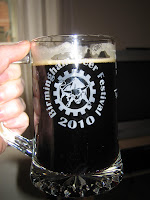 Chris is a fairly experienced all-grain brewer, so I think we were all expecting his beer to come out as the richest and with the most body, and it didn't disappoint! He had added cocoa nibs to the secondary FV, filtered with a hop bag over the tube. Chris explained that the lactose sugar used doesn't ferment out and so leaves the sweetness within the beer. This was reddish-brown, weighty & very full bodied, with good hints of sweetness but a surprisingly dry finish rounded off with rich chocolate flavours.

Matt's homebrewed mead with orange, cinnamon & cloves also deserves special mention - it's unfortunate Andrew couldn't make it or we'd have had a mead-off on our hands also - but I was very impressed with this drop and wished I'd had a bottle to take home.

So Emma asked us at the end of our tastings - which beer did we most want to drink again? And I think we all agreed it was Chris' Chocolate Stout - it's particularly rich body and lovely chocolate tones made it a 'more please!' kind of beer. Sadly no cash prize in it for Chris, but hopefully a smug feeling of validation that the effort put into a full mash brew doesn't go unnoticed!

So our first 'Drink-Off' was judged to be a success - it gave people a focus for their brewing endeavours and a chance to share and see what other people thought, and what other people are making. Hope we can organise another one - perhaps a theme of something pale and summery - though this time it might be winter before we get round to drinking it!

Email ThisBlogThis!Share to TwitterShare to FacebookShare to Pinterest
Labels: homebrew