A Visit to Leith


Although I've been in Edinburgh several times, I had never quite made it out to Leith, it's port district by the waterside. At one time this had some notoriety as a red-light area, but recent regeneration has spruced it up, and I'd hoped to go and have a wander round – and to find some good ales in the process, of course.

The opportunity arose for an excursion when I was visiting Edinburgh a few weeks ago, and so a party of us met to venture out in search of lunch. So with Ian, Kirsty, Andrew and Brendan, we negotiated the buses and headed down towards Leith. I'd been recommended three different ale spots by Scottish beery-types on Twitter, which seemed like a good basis for a day out.

I'd suggested we head to Nobles Bar first to slake our hunger, as I'd been told it did a good brunch (till 4.30pm on a Saturday), which their website menu seemed to confirm. But before we got to food, we were all very impressed by the beautiful interior features – stained glass at the front and back of the pub, alluding to Leith's shipping role, and a nautical frieze around the top of the walls. The décor, relaxed seating areas and friendly welcome soon had us in a chilled out mode, and we got on with the business of choosing from the extensive menu while sampling some Nobles Pale Ale – the house beer brewed by Black Isle Brewery. I was impressed with this - it had a nicely balanced hop character, very drinkable; there was a second cask ale available, and a few Black Isle keg as well. 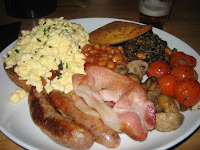 The menu was so packed with good things, we took an age to choose – it had exciting brunch offerings such as as Smoked Salmon Benedict, Croque Madame, and homemade pancakes with bacon, to the more unusual – rabbit burger or duck pastrami sandwich. But I settled on the Nobles Full Scottish to set me up for the day and although many cooked breakfasts may look pretty similar, taste-wise this had lots of “wow” factor – the haggis was the best I have ever had – some research uncovered this is made by a butcher (Findlays) in Portobello, so I'll have to look into mail order as it was pretty outstanding. The little roast cherry tomatoes were bursting with sweetness which Andrew also exclaimed over, and the sausages and scrambled eggs were also damn fine. Ian and Kirsty both had the gigantic haddock and chips with a Nobles IPA batter – light & fluffy, flaky fish, and almost too big to finish. 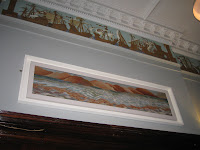 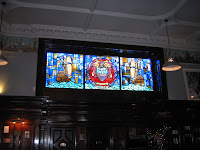 We were all very impressed with our first visit to Nobles and I hope to return sometime to soak up more of it's relaxed ambience.

Next Brendan, Ian and I ventured towards the next pub on my list – The Malt & Hops – but on the way we passed a a shop window which drew our attention - this was Beets Off-Licence and Grocers, on Bernard Street. This was a cave of delights, with lots of local ales, but plenty from respected breweries of the world to make any beer geek salivate. And also, a mini-beach with real sand, right there on the counter! This place would be worth a visit on it's own, and I'm surprised they don't seem to have any web presence to shout about their wares.

The Malt & Hops is a one-room basic pub, but it's clear it has a great cask ale focus with 8 handpulls and is regularly in the CAMRA Good Beer Guide. Here we huddled up to the hearth and sampled a Duke IPA from Highland, an Orkney Dark Munro, and an Orkney Best, over a leisurely chat about life, the universe and everything (beer, mostly). The area outside the pub is attractive too, being at the water's edge, and I would have loved more time to explore around here a bit further. 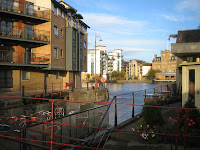 However the day pressed on, and we needed to get to Teuchters Landing, the bar section of waterside restaurant 'A Room in Leith', as I'd been reliably informed that Fyne Ales Jarl was a house beer there – one of my favourite Scottish beers. This had a lovely setting, overlooking some refurbished docks and modern apartments, with some of the historic quayside winching gear forming part of the beer garden features. 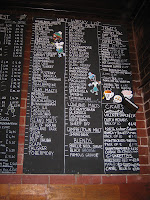 Inside, the bar was extremely well furnished with beer choices – I was so pleased to see that cask Jarl was indeed there, and probably frightened the barman with my enthusiasm to order a round. They also have a Brewdog font; Orkney, Inveralmond and others on cask; and some Scottish keg, from WEST, Innis & Gunn, and Black Isle. A huge blackboard proudly shows off their extensive whisky (and cigar) list – definitely wroth another visit to explore this some cold winter evening. The smells from the restaurant part of the operation were very inviting, and a quick peek showed a bright conservatory-style room out front, with a ship-like feel to the nooks and crannies behind, and a menu slanted towards seafood such as sea bream with Shetland scallops, smoked North Sea hake fillet, and pots of Scottish mussels. I'd really like to come back here for a proper meal, or perhaps visit one of their two other “Teuchters/A Room …“ establishments in the city centre, though I doubt any have a setting to surpass the Leith water front. The Jarl was perfect, condition-wise, and I was sad indeed when the time came to leave.

But I wasn't going to get my pub recce of Edinburgh accomplished unless moves were made back townwards, so we headed next to the Stockbridge Tap. There's been a real buzz about this bar on Twitter and they'd had a lot of acclaim for their recent beer festival, so the huge array of top-of-the-range cask and keg that greeted us was no surprise. Between the three of us, we tried out a good list of beers: highlights were Williams Double Joker IPA, Alechemy Cairnpapple IPA dry-hopped (lots of yum factor!), and bottled Stewart Radical Road (needed a bit of time to warm up for the flavours to come out).

After this there was just time to visit a couple of city centre bars on the way back home – the Bow Bar for Fyne Ales Avalanche and Fallen Odessy Blonde Ale, stopping to chat with the bar staff about their bottle selection (I spotted an AleSmith in the fridge that I hadn't had at our recent tasting), then on to BrewDog. This wasn't as scarily busy as I'd expected for the tail end of a Saturday evening, so we had time to grab a seat and a few more samples – Alice Porter, Hello My Name is Beastie, Hardcore IPA (need that Simcoe hit!) and a beer that really wakened up my palate with its rich hop weight – the Firestone Walker Double Jack. An awesome beer for hop lovers - seriously, if you see this one on offer somewhere, have it!

A successful day out for beer exploration, but one which make me wistful to spend more time up in these parts, as I feel there was probably more to explore in Leith than we saw, the food at Teuchters would have been great, and I would have loved a whole afternoon to sit and sip Jarl, a beer which I never see in Birmingham but which has been a firm favourite since I first encountered it at the Coach & Horses in Dronfield. Next time, next time ...
Posted by tania_nexust at 23:37