I unfortunately have a predeliction for beer hoarding – gathering up interesting looking stuff from travels around the world, supermarkets, online and the two excellent Birmingham beer shops of @StirchleyWines and @CotteridgeWines, and then hanging on to them for ages in my beer cupboard until the right 'opportunity' arises to drink them. Now and again I'll have a bit of a poke around to see what's lurking in there, and if some kind of theme emerges, perhaps it will prompt me into a spate of 'drinking up'.

On a recent Saturday, I realised I’d acquired quite a few coffee beers in the cupboard, and after a great supper of steak-frites, some after-dinner coffee beers seemed like a good fit. This would allow me to compare and contrast them, to see which had elements I liked and what made a ‘good’ coffee beer in terms of my personal taste.

It felt some kind of food accompaniment was called for, and a ponder on Twitter led to @simonhjohnson suggesting vanilla cheesecake as a good match; so with cake supplies purchased, @dave_car ready to help out with the drinking, and the beers lined up, we commenced sampling: 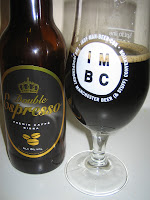 It would seem this beer is made for the export market, with labelling on the back in different languages and “Premio Caffé Birra” on the front, and the label is a stylish matte black with gold embossing. As soon as the bottle was opened a good whiff of coffee and dark chocolate ganache was released. It poured very dark and opaque. In the glass, more chocolate sweetness came out in the aroma but there’s a tiny hint of something else – something slightly artificial like pots of ‘non-diary creamer’. The taste was disappointing compared to the initial aromas, a little thin and watery, but at least no bitter unpleasantness. It was smooth enough but just not much depth, body or finish. 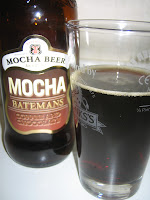 Batemans – Mocha 6%
Oddly this was very fizzy when first poured into the glass. Mid-brown in colour, it didn’t have a lot of discernible aroma, especially when compared to the previous beer. However it’s ‘lightness’ in comparison perhaps made it a little more gluggable, if not particularly outstanding flavour-wise. But if you wanted a lighter-style beer with hints of coffee rather than something heavy, this would fit the bill. 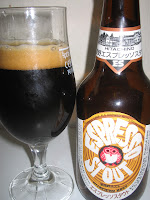 This is produced by the Kiuchi Brewery in Japan, and was brought back from our trip there in April 2011. I don’t mind admitting I have a soft spot in my heart for this beer, as it was the first ever ji-biiru I tasted when @dave_car brought me back a bottle from an earlier trip to the US. I like the description, there's just something about the wording: “This espresso stout is brewed using well-roasted espresso beans. The recipe is based on the imperial Stout loved by the Russian Emperor. Please enjoy the balance of its rich taste and coffee flavour” – the last sentence in particular making me think of Bill Murray's Suntory advert for some reason.

The label states “Scadenza: Nov 2012” which I imagine means “use by” in Italian, so it was appropriate to get on with drinking it now rather than further hoarding. It seemed to me that standing around in a darkened cupboard for a while had brought out vinous notes in it, almost a hint of barrel-aging character. The coffee was more muted on the nose, but it was still there subtly in its full-bodied rich roasty flavour – not as much perhaps as a younger version of the beer, but I savoured the increased structure that had come through with time, and the subtle blending of roast malt, coffee, sweetness, wine and oakey tones. 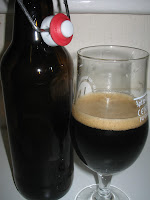 This was a bottle from our own homebrew kit – our first attempt at bottling (from the Dark Beer Drink-Off preparations) and had been stored for around 6 months. We had used a Coopers Premium Irish Stout kit, and modified it with a litre of fresh-brewed coffee in the FV, and had been really pleased with how it turned out at the time, drinking most of it fresh from the barrel with only a few Grolsch-top bottles stored. Just in case, I opened this one carefully in the sink – and it was a bit of a gusher – but thankfully only a little beer was lost. It quickly calmed down and was slightly effervescent in the glass, but not in a bad way. Compared to the taste when it was first made, I felt it could do with more vanilla and sweetness, as the sugars had fermented out leaving it quite dry in bottle. But it still had a smooth coffee character with a hint of roast bitterness, and was very pleasant to drink – it seemed like a competent enough attempt when in comparison with the other beers we’d had that evening. 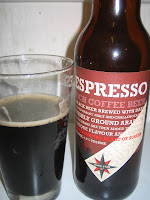 I’ve had this beer (and loved it) in cask several times, but not had a bottle in years. It had a much sweeter milk-chocolate nose than I was expecting, and did have a full, silky mouthfeel, but disappointingly less coffee than I remember it having. As it came into contact with the air more aroma was released, but it still didn't give the depth of flavour I thought I’d experienced in it previously – maybe this is one where the cask version holds all the cards? I’ll certainly be looking out for it on cask over the next few months to try out that theory.


Each coffee beer was quite different to the others, and it was a push to get back to some more homebrewing, to find that our own-made beer (albeit from kit) wasn’t too far off the mark from the commercial offerings tasted. I think my favourite would firmly rest with the Hitachino Nest though – the ‘accidental’ aging gave it the most interesting and complex flavours of the night; perhaps there is something to be said for hoarding after all!