During our previous Twissup, on 30th December, ideas were discussed for future outings to some of the great pubs outside Birmingham city centre – and one proposal seemed like an definite front runner, particularly as the transport option is easy! This is to use the Number 9 bus route out of the city centre through the Black Country, to the towns of Lye and Halesowen, and sample some of the great hostelries there.


Luckily the Number 9 also takes you to the door of one of the region’s more progressive breweries – Sadlers Ales based at the Windsor Castle in Lye – so this Twissup is fortunate enough to take in a handy bus route-accessible brewery visit as well as some decent cask ale pubs, and also Birmingham's newest real ale venture on our return to the city centre.

The itinerary for the day is as follows:

Brunch – I thoroughly, definitely recommend all attendees have a large and hearty brunch before we set off. It’s important to have a good foundation for a day of ale exploring! I am planning to possibly have brunch at Boston Tea Party as they do huge croque monsieurs and other options such as a full English, kedgeree, and bacon & beans. It’s not cheap but it is tasty! Other good Brum independent cafés nearby are @urbancoffeeco (cakes & sandwiches and the best coffee IMHO) and Yorks Bakery Café for tasty hot & cold breakfast options. There are also a plethora of sandwich shops, supermarket chains & others around the Snow Hill / Colmore Row area if none of the above takes your fancy.

12pm – Meet at the bus stop for the Number 9, on Colmore Row in Birmingham City Centre. This is diagonally across the road from Snow Hill station, and about 10 minutes walk from Moor Street or New Street stations. The Number 9 runs fairly frequently – every 10 minutes on a Saturday – so if you are going to be running late and miss meeting up at the start, make sure you know where our first venue is located, and jump on the next No. 9 to Lye.

1pm – The Windsor Castle in Lye
This is the brewery tap for Sadlers Ales and has an upmarket feel, with several of the rooms given over to dining. There should be a fair range of Sadlers Ales on draught, plus bottled American and Belgian beers. In recent years, Sadlers have been flying the flag for hops in the Midlands, producing the lower-ABV but well-hopped JPA (Jack's Pale Ale); a Red IPA with American & Australian hops; the juicy Hop Bomb (Amarillo and Citra); and the Dr Hardwicke's Double IPA, which I have yet to taste, but by all reports is something pretty special! If we're in luck we may find some to sample but this may depend on brewing schedules & availability as I think it's been flying out each time they've brewed it. They also make the award-winning Mud City Stout which is worth the trip alone if you like rich and luscious dark beers.

2pm - Brewery Tour - Sadlers have very kindly agreed to take us on a tour of their brewery at the back of the pub, and one of their brewers will be on hand to talk us through their processes and answer any beer geekery questions. They can accommodate up to two groups of 10, so please make sure you sign up in the comments below to let me know you are coming and would like to see around.

3pm – The Shovel Inn in Lye 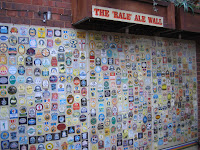 This is a warm and welcoming Black Country traditional pub, with a good range of up to 12 ales - usually including the locally-produced Enville Ale, Enville Ginger, Holdens Golden Glow, Purity Mad Goose, Ludlow Gold and up to 6 guests. We''ll stop off here for one, time permitting, before it's back down the hill to the bus stop.

5pm – Hawne Tavern in Halesowen
If we are doing OK time-wise, then we'll call in at the Hawne Tavern on the outskirts of Halesowen. This is an unspoilt, spartan, traditional pub - and none the worse for it! They can have up to 8 ales on, and are regularly commended for quality & condition. It's about a 10 minute walk from here to our next pub.

6pm – Waggon and Horses in Halesowen for buffet tea
Few people familiar with the Black Country can fail to have heard of the Waggon, for once you are there with a pint in your hand, it is truly one of those pubs you can find hard to leave. They strive to have a great range of beers at all times and usually something pretty hoppy too which tends to go through phases - for a while they seemed to regularly have Thornbridge Kipling and Oakham Citra when these beers could rarely be found elsewhere in the region, and recently have got through many casks of Oakham Green Devil IPA (with a good deal of help from @RobertoRossUK!) as well as showcasing ales from new Halesowen brewery Angel Ales.

The Waggon are happy to have a cold buffet laid out for us and make sure some seating is reserved, so we can refuel and relax for a couple of hours while we check out their beer range, often including Belgian keg beers on tap. Cost will be £6 per head and vegetarians can be amply catered for – as long as we know in advance! So please let me know in the comments below if you would like a buffet tea set out for you to keep your Twissup energies up (I strongly recommend we all do so)! And of course, let me know of any dietary requirements too.

8pm – depart Waggon to head back towards Birmingham city centre 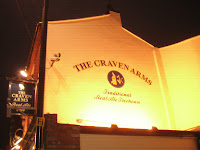 The Craven Arms has now burst into life again as of 22nd February, after a long period of closure – rejuvenated and transformed into an ale emporium by the friendly team of Chris & Sharon, with @19irishdragon also to be found behind the bar dispensing beer & beer knowledge. Chris is working hard to ensure a range of exciting beers – no dull, boring, ‘twiggy’ ale – and with 10 handpumps there’s sure to be something yummy to be found here! The outside of the pub has colourful tiled livery, originally built for Holders brewery in 1906, and the inside retains a cozy 'proper pub' feel, while being rather smart and new at the same time. This will be a good chance for anyone not usually in Birmingham city centre to check out it's latest pub opening, before heading home via train or bus, as it's only 10 minutes' walk to New Street station.

So - let me know in comments below if you are coming along on our Twissup to explore these fine pubs and have a tour of Sadlers while you're at it, and if you'd like to be well fed at the Waggon too! Times above are approximate but it's good to have a rough idea of when and where beer geeks may need herding to next ;-)

UPDATE: Bus tickets - if you don't already have a bus pass that covers Travel West Midlands services, then you may need to buy a Daysaver - this costs £3.90 and you'll need the exact change to buy one from the driver. This will cover your travel for the day - both getting into the city by bus, and for our various stops up and down the Number 9 route.
Posted by tania_nexust at 19:19