Now that I have come to leave Brum, as a parting shot I wanted to pay tribute to something unique in the beer scene that the city has to offer – three amazing local offies within roughly a square mile of each other – or more correctly, a triangle – around the Stirchley and Selly Oak/Bournbrook areas of South-West Birmingham. To find one 'local' (i.e. non-city centre) off licence stocking something a beer geek would consider interesting is rare enough, but to have three within walking distance of each other is pretty special. And now I've moved to other parts of the land where a decent bottle shop is nowhere to be found, I keenly miss the ability to walk in somewhere and spend a good while browsing what's new on the shelves, have a chat with knowledgeable owners on what's upcoming on the beer scene, and leave with arms groaning with great purchases and a shopping list for 'next time' already forming in my head. So if you get the chance to visit Birmingham and have the time for a short bus or train ride to the suburbs, make sure you take a large bag and an even larger budget, and get yourself to one of these gems: 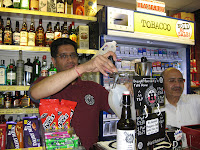 When I first moved to Birmingham, at the time more of a cider and wine drinker than ales (there being no real ale to be found in my previous Belfast haunts at the time to educate me), Stirchley Wines was the only place where 'interesting' beers could be found, signalled by the pink elephant of the Delirium Tremens sign outside the shop. Since then, Krishan and his father have worked to bring a constantly-updating selection of beers to Birmingham's thirsty punters, and the breadth of choice has skyrocketed in recent years. You will find a great selection of Belgian stalwarts – including Rochefort, Rodenbach, Cantillon, De Struise - and stars of the US scene such as Flying Dog, Uinta, Stone, Weyerbacher, Anderson Valley. You'll also find a great range from Nogne O, Brewfist, Elav, and other emerging craft scenes, and the full list of Oktoberfest biers in season. Up and coming UK breweries are also well represented, in particular a good range from Kernel, Hardknott, Thornbridge, Brewdog, Beavertown, Bristol Beer Factory and many more. And the local brewers get a look-in too, so it's a good source to find some Wye Valley, Purity, Beowulf, Titanic, Church End and Sadlers, among others. Not to mention the Japanese craft beers recently arrived from Hitachino Nest, a fair amount of bottled cider, and occasionally a 'beer bread' produced by local artisan baker @loafonline. 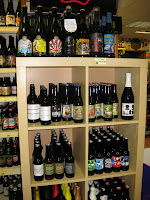 USP – a long-standing institution which now also has two draught keg taps dispensing deliciousness from the likes of Magic Rock, Harbor, Thornbridge, Mikkeller and others, to take away (smart-looking containers provided). And as well as getting involved in lots of community projects and pushing forward the beer festival scene in Birmingham (check out @birminghamcubed happening in July), Krishan will enthusiastically talk your ear off about beers of all kinds if you let him! 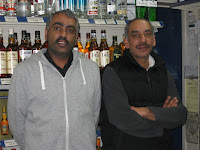 Within a couple of years, the team of Jaz and Kal have managed to turn this local grocer and off licence into a beer nut's heaven – with what I believe to be the widest selection of craft beer available in the city. They were keen to engage with the growing beery community in Brum, asking for advice and suggestions on what to stock, what breweries you'd recommend, and offering trade lists to see if there were particular beers you were after. A few years ago, it was great to be offered a list of all German beers currently available to them, and be asked to 'take my pick' on what I'd want to buy next time we were in the shop – and the German range is still pretty amazing to see. Since then, they've made personal connections with many breweries up and down the country, leading to a recent collaboration brew with Brodies (called Bish's APA, to thank @the_bish for his help I believe), which should be hitting the market in coming weeks – if not already sold out in advance to the online beer geek community! On their groaning shelves, you'll find beers you're familiar with, beers you've heard of but not had the chance to try, and rarities and new releases you didn't even know you were desperate to drink yet! And if they aren't stocking it, chances are they can source it for you, so don't be afraid to ask. Last time I visited, there was a huge amount of choice, but in particular large ranges from Mallinsons, Arbor, Williams Bros, Fyne Ales (including one of my favourite beers, Jarl), Ska in cans, Maui, To Ol, Buxton, Red Willow, Evil Twin, Brodies, Odell, De Molen – and an absolutely jaw-dropping selection from Mikkeller. 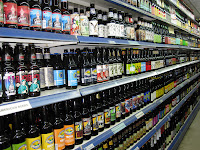 USP – always something new and unusual 'just in', with competitive pricing and an ability to track down that 'rare' beer you might have been seeking (provided it's still being produced of course!) and ensure it's reserved for you to pick up. And soon – their own beer brewed with Brodies – perhaps more collaborations will be in the pipeline? 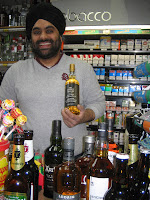 Now this off licence is less 'beery' than the above two, and is in the studentville areas around Birmingham university, but is definitely worth seeking out. The proprietor, Hardeep, is a complete whisky (and whiskey) freak – it's clearly his passion and hobby as well as his business – and there are over 100 different whiskies available here with Hardeep happy to spend time talking you through several of them, working out what kind of thing you might like or explaining the characteristics of new whiskies he has acquired. He has even had a whisky produced for him by renowned distillery Caol Isla – named 'The Whisky Thieves', this is available from the shop in reasonably priced limited edition bottles, and has a spicy, peppery note, that smooths to a slightly sweet finish. It's very easy drinking but with enough complexity there to be interesting, and we've already restocked on a second bottle as a memento of Birmingham's great drinking scene. Hardeep will be happy to recommend several different bottles given your preferences and price range, but I'd also advise you look at his Indian and Japanese whisky offerings as I don't believe this selection can be bettered anywhere in Brum. On the beer side, although the selection may appear small, there is certainly enough of interest – they stock the legendary Bathams Bitter, alongside some Thornbridge, Cairngorm, Sam Smith's, Otley, Hook Norton, and Wye Valley, and other English and Scottish breweries, and a couple of different versions of Harviestoun's Ola Dubh, a rich whisky-cask aged dark beer (great with dark chocolate!). 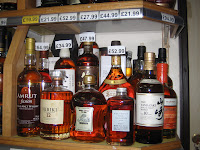 USP – a whisky and whiskey selection that can't be beaten (plus Bathams in bottles!), and knowledge dispensed by a friendly proprietor as obsessed with the whisky scene as you may be with the beer scene, and happy to spend a while sharing his spirit recommendations or discussing beer while you browse the shelves. And the only “Birmingham” whisky – The Whisky Thieves – definitely worth picking up!

So although I write this smitten with a wry bitterness that these three amazing local offies are no longer local to me, I also feel immensely proud and delighted that Birmingham can offer such an amazing choice and service to beer and spirit fans – whether aficionados or newbies, they will find friendly faces happy to advise and converse in any of these three establishments, who are all moving the scene forward in their own unique ways. Visit, and enjoy!
Posted by tania_nexust at 17:28