Before my recent move between cities, I did my research to find out what breweries might be near my new location, and soon identified three whose beers and hopefully premises I would get to check out – the fourth in the Borough, Brodies, and their brewpub the King William IV, already being well known to me!

Luckily, just around the time I was moving, one of these new breweries advertised they would be having a brewery open day and beer festival – a good chance to pay them a visit, and as luck would have it the spring sunshine was at it's height when the day of Brüstival at Brüpond Brewery arrived. 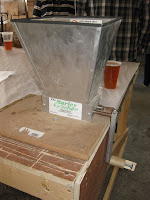 The brewery itself is a little off the beaten track – a W12 bus from Walthamstow took us through an industrial estate until the driver signalled the last stop and we had to get off, not quite sure of our location – so we followed a guy who looked like he might know where he was going, and soon saw we were in the right place with a crowd of people hanging out in the yard enjoying the sunshine, some Mexican street food sizzling up, and the brewery premises beyond.

Inside were a couple of bar areas – one with casks racked up, the other with more casks and a bottle fridge – so we grabbed a couple of halves from the list and had a wander round while working out what other beers we wanted to try. The brewery is in a decent-sized space which meant customers could walk around easily having a look at the kit, the sacks of malt stacked up, and peer into the hop freezer, while the brewery dog Matilda trotted around sporting a brewery t-shirt and generally enjoying the bustle.

Unfortunately the Brüpond Ain'cho Mum's Porter wasn't available – an Ancho chilli beer I had been keen to try – so we opted for their Tip Top Hop (with Motueka) and The Amber Experiment – a Belgian-style beer, with a geuzey-ness presumably from the yeast. The Tip Top is a beer that seems to split opinion, judging by reactions of those I've sampled it with on other occasions as well as this one – some people love it, for others it's not for them – I'm wondering perhaps if it's the flavour profile of the hop used; I believe the next version of this beer will use Celeia, so I'll be keen to find out how this is received. We also tried the Sweet Bee Honey'd Wheat – despite the name, a vegan beer (like all Brüpond's beers) that doesn't use honey – and this was unusual and soft on the palate, but not too sweet, although quite a different style to Bavarian weiss-style wheats. 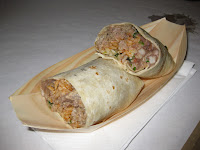 Before making our next beer selections, we thought it wise to try out the burritos and tacos being cooked up in the yard by Luchadores, with large pans of simmering tender pork and beef ready to be served up with your choice of salsa (vegetarian options also available, but I was never going to be swayed from the lure of tasty meats). The 'hot' salsa was HOT – making my tongue sting and my eyes twitch – but I must have liked it as I went back for more! We shared a burrito and tacos and felt we'd provided a sufficient 'fond' to commence further beer exploration.

Next on the roster was the Jack of Clubs, a rich ruby ale from Wild Card Brewery. I met the team behind this nascent brewery while supping their beer – William, Andrew and Jaega – and was pleased to hear that although they are currently cuckoo-brewing at Brentwood, this is only a temporary arrangement while they wait for planning permission to go through so they can get their own brewery set up at the Warrant Officer pub on Higham Hill, as their intention is that the brewery will firmly be rooted in Walthamstow. While these plans come to fruition, they are concentrating on producing just the one beer at present, and settled on Jack of Clubs, as this is a recipe they've been honing as homebrewers for the past six years. It's a very malty, traditional bitter, with rich fruity notes and a slight sweetness on the finish, and has been going down well so far in cask and bottle at local pubs and the Warrant Officer itself. 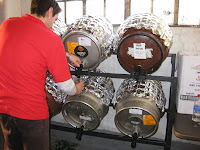 We then got stuck into the two Brodies on cask – the Old Street Pale and the London Fields. Once again, Brodies came up trumps with these super-hoppy pales, with the Old Street being @dave_car's favourite of the day. We also tried the three beers available from another brewery within the Borough – East London Brewing Co. These were the Pale (light and clean on the palate), the Nightwatchman (a reddish bitter), and the Quadrant Oatmeal Stout – this was my favourite of the three, which had a thinner body than expected but a nice creamy flavour and smooth coffee notes on the finish. 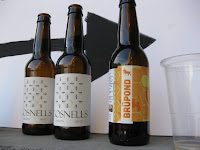 The evening was wearing on, and being unsure of the bus timings we opted for a taxi back to the centre of Walthamstow. But I couldn't leave without trying some lovely fruit gin from local producers Mothers' Ruin – the damson was particularly potent and richly flavoured – and to pick up a bottle of Gosnells London Mead. This is a locally-produced mead (brewed and bottled on the Brüpond premises, in fact) – but displaying a new approach to serving mead – at a lower ABV than usual (5.5%, brought to this level presumably by dilution?) and in 330ml bottles – so it's more like a single-serve of beer. I like this innovation, it could bring mead back to being a more widely enjoyed drink and encourage more people to try it. I took this home and tried it a few weeks later, enjoying the light honey flavours, and the crisp carbonation leading to a dry finish.

It was great to be at a festival actually within a brewery premises, meaning you could meet the team behind the beers and have a look at their working area, and the atmosphere was certainly buzzing with lots of local ale fans – good to meet Mr Mustard, Greavsie, Sam and other people we chatted with from various London branches of CAMRA.

Brüpond are holding several more themed festival events (details here) at their premises over the summer – with the next one being an American Independence-day event, on Saturday 6th July from midday, bringing together beers produced by American brewers at English breweries – as the founder of Brüpond, David Brassfield (known as “Brass”) is originally from Colorado. This will feature ales from Moor Beer, Bexar, Wild Beer Co., Lovibonds and others, as well as the existing range and a couple of new beers from Brüpond. There will also be pulled pork, chocolate beer brownies, and something tasty for vegetarians provided by Queenies, who have run various pop-up food events at the Rose and Crown in Walthamstow. This looks to be a good day out with a range of beer styles represented – so hopefully see you there!
Posted by tania_nexust at 14:57