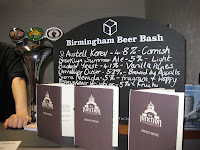 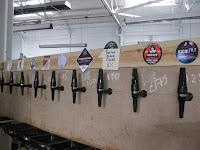 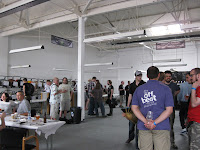 Posted by tania_nexust at 00:29 No comments: 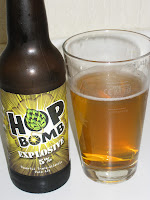 We spent a while longer having a look round the 10-barrel brewery and the cask store, where sacks of used grain from the mashing process were stacked up ready for a local farmer to take away, and returned casks awaited cleaning and refilling with ales to be sent out again, before returning to the bar to work our way through the rest of the range and pick up some bottles to take home. I tried their delicious crisp Red IPA and also Basilisk, a bitter with some slightly sweet notes but a clean finish, and took home bottles of the Mud City, Hop Bomb, and Mellow Yellow, a pale ale with a hint of honey.

It was great to see a truly family-run brewery (Chris's sister also runs the taphouse and restaurant side of things) that is still keen to create new recipes and experiment with different hops coming to market, and it certainly marks them out as the most progressive brewery in the Birmingham area to my mind, and the only one bringing truly well-rounded but sparkily hoppy ales to Midlands punters.

And if you are yet to discover their beers, and like the sound of their hop-experimentation and special recipes, you can find some at the upcoming Birmingham Beer Bash festival on Friday 26th and Saturday 27th July 2013; there are rumours there may be some Imperial Stout available in bottles, and on draught will feature the hefty Dr Hardwicke's Double IPA, and 'Lion Hart', their 4.2% July seasonal beer – which is described as a blood orange ale brewed with juicy American hops and fresh pineapple – sounds perfect for a summer festival!
Posted by tania_nexust at 14:23 1 comment: