(Beery) Things I will Miss About Birmingham


So now it's a reality, I have moved away from my “second home” where I'd lived for most of my drinking life, and taken up in pastures new. I can't deny it's a wrench to leave somewhere I'd become firmly rooted to, and where I'd been a participant in the beer and food scene for so long, watching it develop and change, and eventually blossom into an ever-increasing array of great pubs, independent restaurants and food producers; seeing a community grow up both online and in person to move the city “Forward!” - Birmingham's motto!


Of course, there are plenty of non-foody/drinky things I'm going to pine for too – the Brutalist but firmly for-the-people architecture of John Madin; the vibrant suburbs of Harborne, Stirchley, Kings Heath, Moseley; the beauty of Bournville in the spring; leafy canals and lofty buildings; spaces with 'hidden' history where nightlcubs, factories and cinemas used to be; the secret parts of the city that are imbued with personal meaning.


But this is a blog primarily about food & ale, not melancholic psychogeographical contemplation, so here are the top 10 beery(ish) things that make me sad to be leaving: 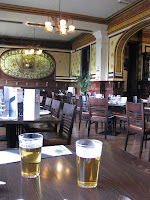 The Bartons Arms – my number one pub hangout in Brum, that I came to consider my “local”, even though it took two bus journeys right across the city to get there from home. But the Bartons has held a special place in my heart since Oakham took it over and invested heavily to bring it back to it's former glory – with it's amazingly beautiful historic interior of etched glass and Minton tiles, serving good value Thai food and those quaffable Oakham ales. I've seen different landlords and bar managers come and go here, but they each brought character and a warm welcome, and ensured 'regular's corner' remained a fixture where I could always find a friendly face any time I visited. When Oakham introduced the Citra hop to these shores, my cross-town visits increased further, and I never stopped appreciating what a great pub we were lucky to be able to visit regularly. Visits here helped me through sad times and to celebrate many good times, and it's always felt like a 'home from home', so it seemed fitting to have one of my last pub outings in Brum to the recent beer festival here with a bunch of chums.  I hope it continues to excel in being all that a pub should be.


The Electric Cinema – some time back, myself and a friend worked hard to get Purity beer and the Electric linked up via Twitter, so we could have a decent and local ale to drink while basking in its comfy sofas. The Electric was my haunt when it was more of a run-down, underfunded, shabby porno-chic hangout, but I loved seeing interesting Arthouse double-bills there, while sitting on the worn seats and enjoying some 50p homemade cake and coffee. Now it's been brought back to life with a retro feel under the steady hand of 'local boy done good' Tom Lawes and it's the only place I want to go to see films, while supping on a Pure Ubu or movie-themed cocktail. 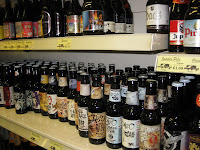 Stirchley Wines and Cotteridge Wines – two amazing bottle shops that were a short bus or cycle ride from my home, whose range just kept getting better and better over the years and through the hard work of their owners. I'll doubt I'll ever again be so close to not one but two “Aladdin's Caves” of beery joy and friendly proprietors. I've talked more about their delights in my recent blog post here.

Great Western Arcade – again a great destination for Brum foodies, with Anderson & Hill (great Italian deli, also sells local bottled ales) and Loki Wine (a wine merchant where you can sample the wares before buying, with a smart seating area up above) facing each other, an artisan bread maker at one end, and the Whisky Shop there too (selling some whisky cask aged beer like Harviestoun's Ola Dubh). It also hosts Hollingsworth's for your cigar and tobacco needs, an old-fashioned sweetie shop, a refined chocolatier, and Druckers patisserie. If more specialist food or drink retailers move in, this has the potential to be the most exciting shopping street in the city – perhaps this is where a city centre craft beer shop should be appearing! 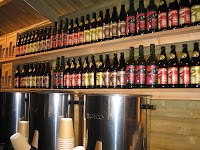 
Some Brum-dwellers hated the crowds and hustle this caused in the city each November and December, but I loved it for the multitude of yummy stuff it brought within easy reach – and also because weissbier is a favoured drink in our household. But best of all was the Hogan's Cider Bar – quality draught cider and perry, hot spiced, vintage bottled – and Allen Hogan always willing to dispense some cider knowledge while we hung out with cidery chums from Leicester and further afield.


The Victoria – I first visited this pub when it was a dingy bar, more than a little run down, but providing useful meetups for the LGBT scene courtesy of the two ladies who ran it. But after a period of dereliction, it was taken over by the budding Birmingham indie pubco of Bitters N Twisted, and embodied everything I'd want in a 'night out' pub – music erring on the rock and indie side and cask beer in cutely decorated surroundings. In the past year they've upped their game on the beer side too, and now scene stars like Red Willow, Hardknott, and Thornbridge often make an appearance on the pumps; they were also the first pub in the city to start stocking the type of bottles a beer geek would make a beeline for – Partizan, Arbor, Kernel, Tiny Rebel, with some great soul food to go with it. 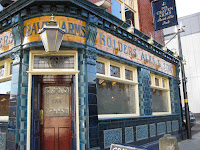 Craven Arms – this may be Birmingham's newest ale pub, but from the minute it opened I knew I would be missing it when I left, because it's run by two lovely people – Chris and Sharon – who are dedicated to good beer, and it's got a lovely 'proper pub' feel to it. With Chris striving to bring in the most interesting ales, around 9 ciders and perrys, and bottles of Cantillon and De Molen for a very reasonable fee, it became my Friday evening hangout of choice, especially as Chris's music policy seems to cover just about every indie and alternative band I'd want to hear!


Past drinking spots – now closed, The Foundry and the original Edwards Number 8 – I never drank anything 'decent' in here – it was all bottled Pils and K cider – in the days before I discovered real ale, though I don't think the Ansells keg bitter would have done much to help me down the path if I'd tried it – but these were places where I spent a huge amount of time and helped me feel rooted to Birmingham, and interested in the history of its pub, brewery and nightlife scene, so I'll mourn their passing from my regular thoughts as I won't be looking out of a city centre office window being reminded of them every day. 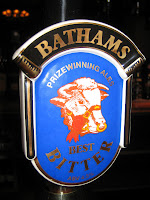 Black Country bitters – Bathams and Holdens, I'm looking at you – with anguish, knowing that even though I don't get to see you on draught that often in the middle of Birmingham, I'm going to see you even less now I'm 100 miles away from the Black Country. This is painful to contemplate as these were already beers I got cravings for when they were practically on my doorstep – what torture to maybe only get a drop of these on cask about once a year from now on! I'd love to see these breweries feature even occasionally in London, but it's also perversely pleasing to think that this kind of bitter is still a regional treat, for those who can make it back to the industrial heartlands.

Lastly, but very definitely not least, the beery people I have met over the years – from becoming active in the local branch of CAMRA when I first joined, volunteering initially to run the cider bar at the beer festival and increase the range of cider in the city, and eventually organising the beer festival itself, and the many great people I have met via CAMRA or 'down the Anchor' over the years who I now count as good friends; to more recent friendships formed with Twitter as the medium, getting to meet a fantastic bunch of great folks – I'm going to miss them all like hell and hope that somehow I'll still see a fair bit of them if I get to make trips 'back home', at beer festivals round the country, and if they come to beer geek gatherings in London. At the very least, I hope a large swathe of them will be at the Birmingham Beer Bash festival in July, so we can catch up over some of the most amazing beer Birmingham will have seen!


There are many more things about my adopted Brum homelands that I'll miss with a passion, but in the spirit of Beer and Food Adventuring, I know the flipside is that there are also many things to explore and discover around my new home – so I'll take Birmingham's motto with me as I go - “Forward!”
Posted by tania_nexust at 09:28